MISTERMAN
Enda W﻿alsh (PLAYWRIGHT) shot to fame when he won both the George Devine Award and the Stewart Parker Award in 1997 with his play Disco Pigs. In 2007 and 2008 Enda won Fringe First Awards at two consecutive Edinburgh Festivals for his plays The Walworth Farce and The New Electric Ballroom. The former led the Guardian to name him "one of the most dazzling wordsmiths of contemporary theatre." Since his initial success as a playwright, Enda has gone on to write for the screen. His 2008 biopic, Hunger, told the story of the final days of IRA hunger striker Bobby Sands and won a host of awards, including the Camera d'Or at the Cannes Film Festival and the Heartbeat Award at the Dinard International Film Festival. It was nominated for seven BIFAs (including Best Screenplay), six British Film and Television Awards (including Best Screenplay and Best Independent Film) and BAFTA's Outstanding British Film Award 2009. He has since adapted his stage play,Chatroom, for the big screen.
Melissa Firlit ﻿(DIRECTOR)﻿ is a working director based in New York City. She is thrilled to be bringing Misterman to Ireland after developing this production at the Pagosa Springs Center for the Arts in the fall of 2014 and the Boulder Arts Festival in the Spring of 2015. Recent credits include: Albert Porter, Boy Explorer (Creede Repertory Theatre), which is currently touring the Southwest region of the United States. Aida, Buyer & Cellar, Always…Patsy Cline, A Funny Thing Happened on the Way to the Forum, A Few Good Men, Moon Over Buffalo, The Pillowman, The Secret Garden, A Picasso, and Red (Pagosa Springs Center for the Arts), Dracula (Mile Square Theatre), The 25thAnnual Putnam County Spelling Bee (The Princeton Festival), Misterman (The Dairy Center), BUBBA(FringeNYC, MST, Planet Connections, UnitedSolo Festival, Theatre Tuscaloosa), SIDD (Chicago Fringe Festival), Bunting or Flags (New Light Theater Project), Annabel Lee (Apothecary), The Death of Evie Avery, A Nasty Story, and The Rise and Fall of Miles and Milo (FringeNYC), By The Light of the Silvery Moon (Midtown Int’l Theater Festival). Trojan Women: A Love Story (Fort Lewis College),Stop Kiss (Wagner College) and Under Construction, Fabulation, Machinal, Solitary, boom,Any Place But Here, Lone Star and Lost Persons (Rutgers University). As part of her personal commitment to new work and collaboration with playwrights in process, Melissa dedicates a lot of her time to plays in various stages of development. Melissa teaches at the renowned McCarter Theatre Center in Princeton, New Jersey, helms a Musical Theatre Bootcamp Program at The College of St. Rose, and does workshops at colleges across the United States. Melissa received her MFA in Directing from Rutgers University’s Mason Gross School of the Arts. She received her BA in theater and a minor in music from The University of Hartford and The O’Neill National Theater Institute.  She is an associate member of SDC. www.melissafirlit.com.
﻿﻿﻿Elaine Wong﻿﻿  ﻿(﻿LIGHTING DESIGNER﻿)  originally from Mississauga, Ontario, and received her MFA in Lighting Design from Rutgers University.  Her previous design work includes BUBBA (Black Angus Productions), Echoes (Yass Haskoshima Movement Theater), Tales of Hoffmann (Westminster Choir College), Much Ado About Nothing (Snapped Productions), Once Upon a Mattress (Princeton Festival), The Box Social (Preface Theatre), and Machinal, Intimate Apparel, Tracing Nora, Egyptology, Czech Girls!, Laundry and Bourbon, Lone Star (Rutgers Theater Company).  For her work with BUBBA at the Planet Connections Theatre Festivity this summer, she was nominated for an Outstanding Lighting Design award. Previous technical roles of note include: Draftsman and Lighting Technician with the Bill T. Jones/Arnie Zane Dance Company, Technical Director for the Jameson Studio Theater at Rutgers University, and Production Technician with the Jacob’s Pillow Dance Festival.  She is currently the Master Electrician for Montclair State University's Memorial Auditorium.  Her upcoming work includes a semi-staged performance of Carmen (New Jersey State Repertory Opera) and Vietnam…Through My Lens (LS Nelson Productions).  Her website can be found at www.elainewong-lx.com.
Matt Bittner  (ORIGINAL MUSIC / SOUND DESIGN) Selected Credits: Circle Mirror Transformation, Core Values, Cyrano (Mile Square), Judgment of Fools, Little Prince$$ (InViolet), The Pillowman, Misterman (Thingamajig Theatre Co), Repairing A Nation, Autumn, College Colors (Crossroads Theatre Co), Hounds of War (Wee Man Prod), Romeo & Juliet, Boy Gets Girl, Macbeth (Playhouse Theatre Tulsa). Training: MFA in Acting, Rutgers University.

Stefanie Genda (COSTUME DESIGN) Theater: To Kill a Mockingbird, Twelve Angry Men, Clybourne Park (Florida Repertory Theater), Kiss Me Kate, My Fair Lady, Yeoman of the Guard (Ohio Light Opera), Crossing Swords, Marry Harry, tick, Tick...BOOM! (American Theatre Group) The Pavilion (Mile Square Theater), Othello (American Shakespeare Center) Sweethearts (Light Opera of New York ). Stefanie is also the Assistant Costume Supervisor for Manhattan Theatre Club and has worked at Lincoln Center Theater, The Public, and MCC Theater.
Andrea Ainsworth (Voice Director) Andrea Ainsworth has been the Voice Director of the Internationally renowned
Abbey Theatre since 1995, working closely with both Irish and international directors on all productions in the Abbey and Peacock theatres. She has taught in drama schools in London and helped develop the professional actor-training programme in the School of Drama, Trinity College Dublin. She has worked with most of the independent theatre companies in Ireland and also coaches actors for film and TV. She is currently working on Hamlet in the Gate theatre, Dublin.
Mae Frankeberger  (PSM) Mae is over the moon to be returning to the Misterman team. Recent credits include: A Real Boy, Rockin Road to Dublin (USA tour), Bodies of Water, Antigone, Rudolph the Musical (USA tour), Twelfth Night, Empire Travel Agency, Exit Stage Left. Thank you to my family and Bobby for your love and support!  ​
Kelly Johnston  (Associate Producer; Reign or Shine Productions) After getting his Bachelor’s degree at UNC at Chapel Hill in Theatre and his Master’s degree in Directing at the California Institute of the Arts, Kelly now works as a freelance director, nationally and internationally, as well as in New York City. Prior to teaming up with Matthew, he co-founded and ran two different critically-acclaimed theatre companies: Sirius Theatre in Los Angeles and the Arizona Shakespeare Festival, where he was the Artistic Director for its first twelve seasons. He moved to New York for the love of his life, Ms. Leslie Ann Kent. He has two amazingly wonderful daughters, Laurel and Kristy; shares an apartment with Ms. Kent and two cats, Annabelle the Pig the Cat and Jackie the Very Strange; and is inordinately fond of pie. He is a proud Member of the Society of Stage Directors and Choreographers, a co-founder of Reign or Shine Productions, a founder of Directors Discuss, an Associate Artist of the Arizona Shakespeare Festival, and a Resident Director for Magis Theater.
Matthew Klein  (Associate Producer; Reign or Shine Productions) Matthew Klein, is a New York based playwright and producer. Matthew received the Lipkin Award while earning his MFA in Theatre at Sarah Lawrence College. Matthew then moved on to be the Artistic Associate for Off-Broadway company The New Group (Avenue Q) working directly under Tony and Obie winning director Scott Elliott. Matthew's been produced for pieces he's written and directed throughout the country and Canada, along with being a company member for Six Part Productions and a partner in Reign or Shine Productions, both based in NYC. Matthew's recent work, DEAD FOR A DUCAT, a film noir adaptation of Hamlet, received a workshop production at Shetler Studios in New York last spring and his time traveling romantic comedy, STRINGS, ATTACHED, received a reading at The TAI Group last summer.
Michael Walker  (Associate Producer) Michael Thomas Walker currently teaches acting, voice, and speech at the University of Montevallo.  He is originally from Huntsville, AL. After graduating from the University of Alabama with a BA in Theatre, he moved to New York City where he has performed with The New Light Theater Project, The Weasel Festival, Jean Cocteau Repertory, Guerrilla Theater, Boomerang Theater Company, and the national tours of Hairspray playing Edna Turnblad and Seussical the Musical as Horton the Elephant. Michael is a graduate from the Rutgers MFA Acting program where he studied the Meisner Technique with Deborah Hedwall.

Michael was a finalist for the Edna St. Vincent Millay Colony Playwriting Residency and is a recipient of the Wildacres Playwriting Residency. His interview based solo show, BUBBA, received the Best Variety Show Award in the United Solo Festival, Best Solo Performance Award for the Planet Connections Festival and was recently performed on NPR’s Tales From The South. His film and television appearances include Boardwalk Empire, Dirty Little Secret, Now That’s Cute, and Non-Stop.

He is currently working on a devised theater piece about the death of Michael Brown and the Black Lives Matter movement for the National Performance Network which will be performed at the Black Rep of St. Louis and 651 Arts of Brooklyn, NY.

He is a member of Southeastern Theatre Conference, Voice and Speech Teachers Association, Screen Actors Guild, and Actors Equity Association.
Special Thanks (Donors and Sponsors of our 2017 international tour)
Resolve production's and Reign or Shine's International Tour is being made possible in part through the generous support of the following individuals:​
Special Thanks (in no particular order) for your support in creating the touring production of Misterman. The support of the following generous donors is what created the touring production that currently exists today. 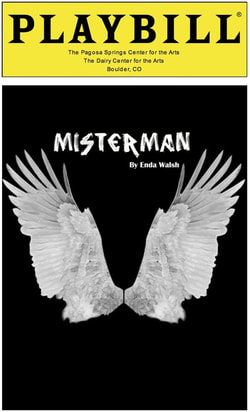